This is where we need to be with our rallies!!!! 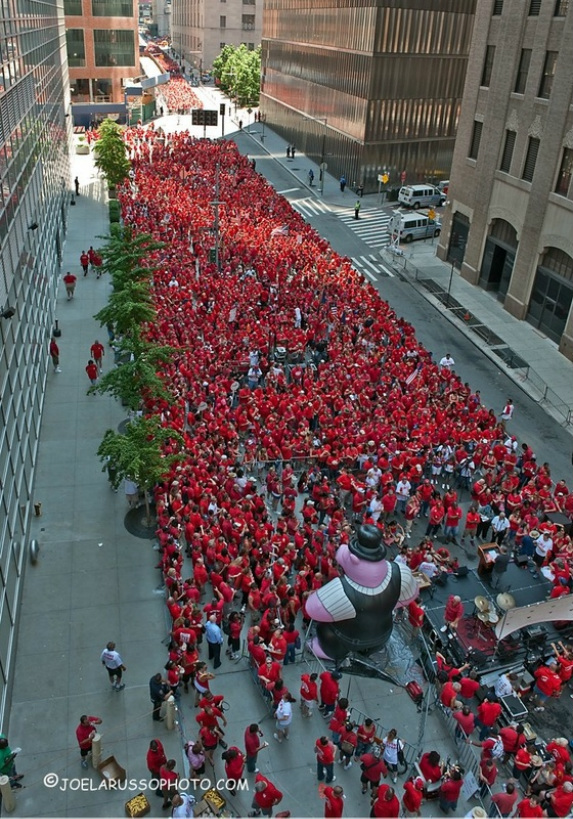 Why wear RED on Thursdays?

In 1989, NYNEX employees were on strike for 17 weeks.  The strike was settled in December 1989 but not without a price.  In August 1989, during the strike, a Union brother,  Gerrry Horgan, was struck by a car driven by a scab.  Gerry was CWA's Chief Steward for Westchester County.  Shortly after the incident, the wearing of RED was established to show solidarity and remember the bloodshed for our fellow brothers and sisters in this strike and any strike.  The bloodshed during this strike was not only of our fallen Union brother but the financial difficulties a strike can endure.  The bloodshed is also a remembrance of the fight we face everyday to protect our precious benefits that the Companies continue to strip away.

Wearing RED on Thursdays is more than just wearing a shirt.


TEN WAYS TO KILL YOUR UNION

1. Don't come to the meetings.

2. If you do come to meetings, come late.

3. If the weather doesn't suit you, don't come to meetings.

4. If you do attend a meeting, find a fault with the work of the officers and other members.

5. Never accept an office, it's easier to criticize than to do things.

6. Nevertheless, get sore if you are not appointed on a committee, but if you are appointed, do not attend the committee meetings.

7. If asked by the President to give your opinion on an important matter, tell him you have nothing to say, after the meeting tell everyone how things should be done.

8. Do nothing more than is absolutely necessary, but when other members roll up their sleeves, willingly and unselfishly using their ability to help matters along, howl that the union is being run by a clique.

9. If you local is struggling from a financial standpoint to maintain offices on your behalf, be sure and muster all the help you can, to vote against a dues raise.

10. Don't bother about new members, let the other person do it.